The European Investment Bank as the EU’s Climate Bank

Excerpt from the Introduction:

For a long time, EU integration scholars and the broader public alike have rarely taken notice of an institution that had already been enshrined in the Treaty of Rome and today is nothing less than the largest multilateral lending institution globally: The European Investment Bank (EIB). While ‘hidden in the woods of Luxembourg’ (Financial Times 2019a), opposite the European Court of Justice, the EIB’s evolution into a key vehicle for addressing the financial and economic crisis in the 2010s has moved it to the fore of EU policy making. Moreover, at the end of that decade, the EIB has become a central actor in the EU’s climate policy landscape. It did so, first, by announcing in November 2019 its intention to transform itself into a ‘climate bank’ proper through aligning its financing operations with the goals of the Paris Agreement and phasing out lending for fossil fuel projects; second, by assuming the role as the main implementing partner in the European Green Deal’s investment pillar, the Sustainable Europe Investment Plan.

This chapter seeks to assess the EIB’s role in the European climate policy landscape and its capacity to live up to its declared ambitions in the field of green finance. It will weigh the option of whether the climate bank agenda is best understood as one of a policy entrepreneur committed to ecological transformation or whether it is de facto a form of “organized hypocrisy” (Brunsson 2002) that mainly seeks to gain legitimacy. 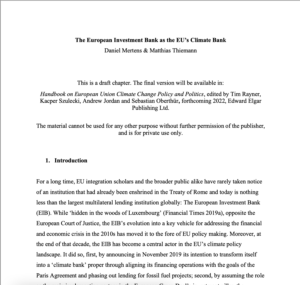 The material cannot be used for any other purpose without further permission of the publisher, and is for private use only

Back to all publications