On 26 – 30 August 2019, the Erik Castrén Institute and the University of Eastern Finland (UEF) Law School are organising the Helsinki Summer Seminar on International Law on ‘International Environmental Law: Process as Decline’. 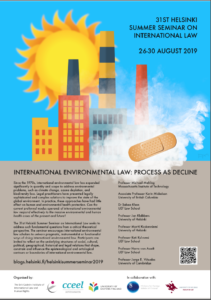 Further information on the programme and registration will be provided shortly on the event’s website.

Back to all news